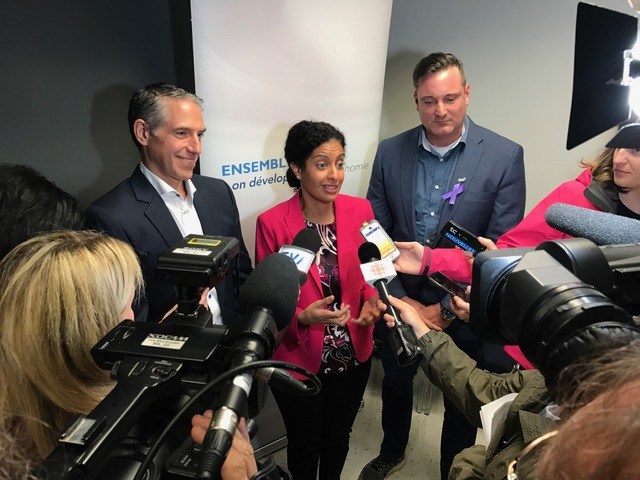 Longueuil (QC), June 6, 2017 – Ultima Foods is investing $14.4 million to install a new drinkable yogurt production line and optimize operations at its Granby plant. The yogurt maker is providing $10.8 million, while Investissement Québec is contributing a $3.6‑million interest-free loan. The investment will create 35 to 40 jobs.

“In the highly competitive yogurt market, innovation drives our growth,” says Martin Parent, president of Ultima Foods. “Not only do we have to serve consumers, who are always on the lookout for new products, but our facilities must also be extremely efficient to build our relations with our clients.”

Ultima Foods produces 30% of the yogurt consumed in Canada. Since the 2012 iögo brand launch, the company has not stopped innovating, adding new formats, such as pouches, and trendy products like smoothies to its yogurt product line. The success of these products is the main reason behind the investment announced today because the company had reached the limit of its drinkable yogurt production capacity. The new production line will boost growth at Ultima Foods, while enabling the company to meet the strong demand for drinkable products.

Innovation permeates every part of Ultima Foods, and continuous improvement of its operations is a top priority. Thanks to new equipment and procedural fine-tuning made possible by the $14.4-million investment, weekly production at the Granby factory will go from 2.7 million units to 4.8 million. Optimisation of its operating costs will allow the company to reinvest even more in the development of new yogurt products.

In 2016, Ultima Foods invested $12-million in innovation, behind R&D and marketing. Innovation is the key to the company’s success, as can be seen by the synergy among measures taken to offer a varied line of quality products popular with consumers of all ages. According to a 2016 Nielsen study, millennials enjoy iögo just as much as baby boomers do. “Apart from the considerable sums spent on innovation, the strength of Ultima Foods is in its ability to turn new ideas into commercial products that satisfy consumers and meet their needs. We are not talking about innovation as a distinct activity conducted in a silo, but truly as a guiding principle within the company,” explains Guy Belletête, co-founder of Institut de développement des produits, which supports innovation and the entrepreneurial spirit in Québec businesses and organizations as development vectors.

Ultima Foods is Canada-wide food processing company with strong national roots recognized as a talented yogurt-brand builder (iögo and Olympic) and nimble innovator that boosts growth in the yogurt sector. It is also known for its close relationship with consumers and communities, and as a competitive producer constantly open to new ways of doing things. Ultima Foods is headquartered in Saint-Hubert (QC), employs around 660 people in Canada, operates two factories (Granby, Qc and Delta, BC), and has three sales offices across the country.

Ultima Foods is a privately held company with cooperative roots, being equally owned by two dairy cooperatives, Agropur and Agrifoods. Indeed, it is the only major yogurt producer that is 100% Canadian owned. Production, R&D, and product marketing are entirely conceived and carried out in Canada.

For further information and media interviews:

5 years after the launch of iögo, successful bet of Aliments Ultima.